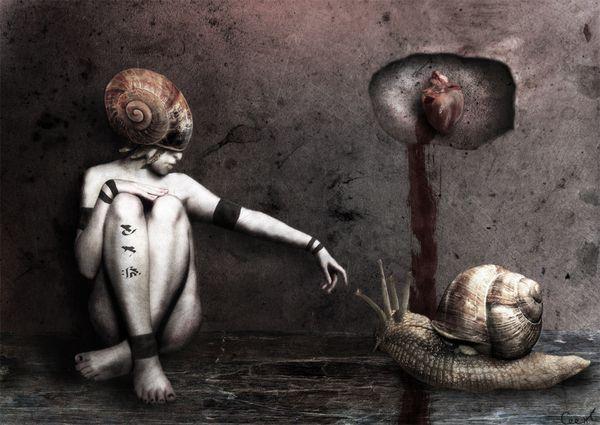 With 30 years of charges on my back, it may seem absurd to feel the need to communicate projects and considerations. With the insistent censorship that distorts everything I write and say, it may seem stupid and mad to continue to resolutely communicate and write considerations lending themselves to censorship. I need such stupidity and madness to feel still alive and participating.
I have only one choice, back to the wall: continuing struggling, continuing with every means at my disposal.

I got inspiration to write this text from the prosecutor Sparagna [in charge for Scripta Manent]; in his solitary “interlocutory — monologue” he claimed with ill-concealed embarrassment that he got us by process of elimination, by the “scorched earth” that the anarchist movement in Italy made around us. Is it possible that the anarchist movement here in Italy sank so low as to not feel empathy with comrades caught in a grip of repression, to think of us as a foreign body?
The truth can not be found in the “specious” and stupid logic of a prosecutor from Turin. The truth is hidden in the folds, in different expressions of solidarity that have been addressed to us, in the opportunity that even a wave of repression such this one could give us. This is apparent from many actions expressing solidarity across the globe to us, this is apparent from a few but significant solidarity statements that we received. At first glance these statements may seem like the usual solidarity for appearances’ sake, but at my eyes they become fully meaningful.
Maybe because of their origins, comrades with different projects, despite everything, were profoundly, directly, touched. Maybe because all these comrades are in some way part of this anarchism of praxis that keeps anarchy alive and kicking, and well reacting across the globe. For this and for many other reasons, those words of solidarity are no small things and can become an opportunity, especially if they can go beyond the repressive matter.

The opportunity offered to us is the real chance that different, but always determined and aggressive, paths can intersect at certain points. Not without reason, the power aims to divide anarchists in good ones and bad ones. And here “Vetriolo” [anarchist journal] come into play.
I can’t help it. When realism and logic tell me to stay silent and wait, I refuse to do so.
“Vetriolo” is an in-depth a-periodical where different “social” and “anti-social” positions and ideas, “organizational” and “anti-organizational” attitudes, supporters of anonymity and not, can confront each other fairly and clearly, speaking frankly.
I am sure that until we don’t resolve some issues, we will continue to limp. I am not interested in a sterile union, mathematical and quantitative, but in a opportunity where comrades with different perspectives can cooperate without affecting each other, without giving up anything, without distorting their own projects. It is just a matter of method. In my head I have thousand of question, and some answers that an in-depth journal of theory like “Vetrilo” should approach. Like all those trying to put in practise what they say, I have more doubts than certainties. In a training room for theory, in a confrontation/collision between different ideas, new inputs can pop up, giving us new possibilities and more efficient means.

Affinity groups, individual actions, organizations. Simple techniques to use accordingly to the opportunities that arise from time to time, or something much deeper to put in practise according to our specific inclinations, individual aspirations?
Simple techniques to use coldly, with calculation and determination on the grounds of social situations to trigger a revolutionary process, which will transform us in revolutionaries, projecting us in the future?
Or existential choices overwhelming our entire deepest being, transforming us in conscious rebels who live their anarchy now, immediately, in a continuous confrontation with the existent?
Affinity groups, individual actions, organizations. Techniques, means, weapons to strike, each of them with its weaknesses and its qualities. The only “unit of measurement” we have to comprehend which way to act is our own way, is the naturally inclination that everyone has as an individual inside him/herself.
It is a “trade off” between the freedom you loose and the new possibility you get. For someone, restricting his/her own freedom (creating some rules) in exchange for greater impact strength can be worth of, for others not. It is about personality, the elements are many and all of them are about our freedom, our sensibility.
The hate we feel against the system sometimes is so strong that can make irrelevant the apparent freedom we loose to get increased virulence, greater strength and operability. It is important be aware that organizations, individual acts, affinity groups are all in the same way part of the “means” that anarchists historically have always used. It is ridiculous to cry foul if an anarchist use an “informal” or “specific” organization, it is pointless to be indignant, everyone makes his/her own choice.
I think we are missing the point, here: being able to “communicate” at some moments, sometimes, without knowing each other, comrades who have different ways to act, without cancelling each others, without stepping on any toes, without coordination and hegemonic superstructures overriding organizations, individuals, affinity groups which should never come into contact. But they have to join forces providing a common timing for action. I think this is the real challenge we face, the main issue that will need to be address.

Alfredo wrote this greeting for the edition of “Vetriolo” #0 in November — December 2016. As is known, the letter was blocked by prison censorhip. Finally, now we are able to disseminate it. We recall that the censorship was significantly tightened in the last months, a clampdown obviously ordered directly by the prosecutor Sparagna, this is not an occasional zeal of a prison officer in charge. Apparently, there are actual guidelines on what to have get in and what not (for example, “Vetriolo” was not received by anybody, at first). In protest against the censorship, Alfredo was on hunger strike from May 3 until May 13.
BREAK THE ISOLATION!