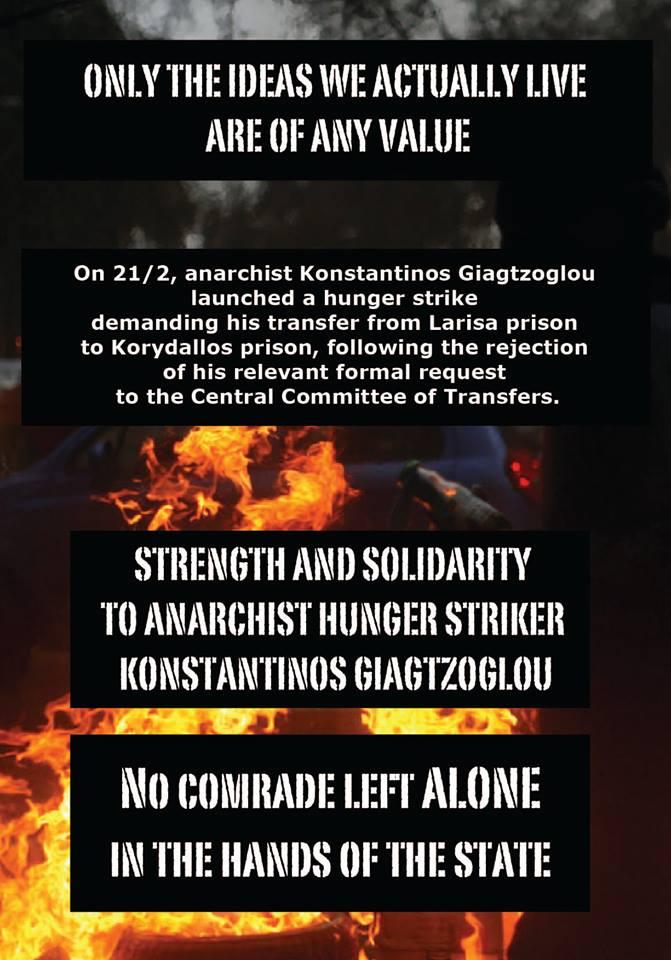 Anarchist comrade Konstantinos Giagtzoglou was arrested on October 28th 2017, while exiting a hideout rented by him under a false identity and while transferring guns and explosive materials. Ntinos is accused of being a member of the Conspiracy of Cells of Fire and for sending parcel bombs to various E.U. officials including the former prime minister of Greece, Loukas Papadimos. The cops’ accusations are based on a mixed DNA sample and on the fact that Dinos was visiting a former anarchist prisoner in Korydallos prison in early 2013. The comrade stated that both renting the appartment and transferring the equipment were part of “revolutionary solidarity” and denies all other charges.

The judicial authorities aim to isolate him by assigning him to Larisa prison for his pre-trial detention, in a city 355 kilometers away from Athens where his family, friends and comrades are. Ntinos was transferred in Korydallos prison a few days ago to be tried for an older case (he was arrested in Athens, in 2011 during massive clashes with riot police). While there, he was informed that his official request to remain in Athens (Korydallos prison) until his new trial was denied by the Central Committee for Prison Transfers. As a response, the comrade decided to go on a hunger strike on 21/02, demanding his permanent transfer in Korydallos prison until the time of his trial.

— A group called “Destroyers of social peace” heavily vandalized a post office and a local branch of Piraeus bank in Athens, on 18/01/2018