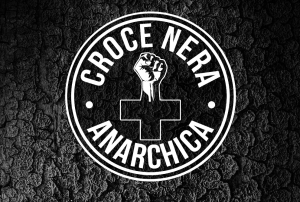 „Between these four increasingly narrow walls

I cultivate my hatred towards the system.”

If you are anarchist accept the idea, if you have not done so already, that you could end up in prison sooner or later, and there are different paths that can lead you in.

If you are anarchist, in the first place, you have to be careful what you keep in house: the common things, more or less usual, in the cops’ expertise become components of devices or explosives; a story we have seen recently, by the way, in Bologna too, with a comrade ended up in AS of Ferrara prison. Even books, pamphlets and texts, the so-called „paper documents”, become evidences of affiliation with the terrorist organizations.

And then, there are the classic crimes of association, usually the 270bis, that allow the cops to put you in prison without even bothering to provide „concrete” elements.

Basically, the paths are many, but the reason is only one: be irreducibly aligned against power.

If I’m saying this things it is certainly not to complain about the unfairness of the democratic justice, but to point out how easily an anarchist be incarcerated, despite of his prudence. The awareness of this risk should not frighten us, just help us to be ready.

So, „Scripta Manent” comes, certainly, as no surprise, it is a repressive attack on which the only one doubt was about „when”, but not for sure „if”. An attack of democratic regime against those who, inside it, still refuses to submit to the values and to the morality of dominion, placing himself not in a conciliatory perspective of dialogue and compromise, but in the open conflict with the power. „The State is not thinkable without lordship and servitude. For the State it is indispensable that nobody have an own will; if one had, the State would have to exclude this one; if all had, they would do away with the State.”

After all, if you end up in prison or not, it is a part of the anarchist path anyway. Because it is a spectre that hangs over your head, because it took friends or the loved ones, or just because it is the foundation of this society we hate („repression is civilization”).

But the constant threat of prison is not enough to suffocate the rage we feel in front of thousands of killed and tortured animals every day, in front of entire ecosystems wiped out by the voracity of technological society, in front of million of individuals forced to alienation in their workplaces or in the infamous prisons or in the concentration camps for migrants, in front of people killed by hunger and wars.

And how could you bow your head resigned in front of the continuous interference of the State in our lives?

This society in which, like in a shopping mall, everything has its price, everything can be bought and sold, if you have money to do it, this society based on profit at any cost will have always an extreme enemy, who is not willing to trade his life and his dignity at any price.

The money is the only engine of this system of death and misery. The State legitimate the money, the police protect it, the newspapers give voice to its lies. The anarchists refuse it and attack it.

Solidarity with the arrested, suspected and searched in the operation „Scripta Manent”.

Solidarity with those who in this world pay the price for opposing this system of domination.

With those who under a grey sky choose to provoke storm.

For a world build on the ruins of this.

„Charges on charges, sentences on sentences,

but what matters is the moment of capitulation.”