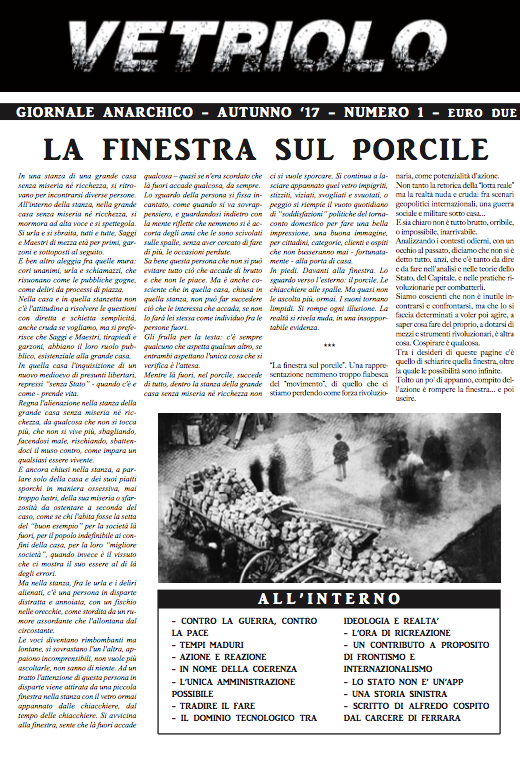 We published issue 1 of anarchist paper Vetriolo at last. At the same time we also printed issue 0 for those who have recently asked for copies, as it had been out of stock for a while. After several months of censorship the contribution anarchist comrade Alfredo Cospito wrote last winter for the previous issue has arrived. His letter had been blocked and seized on order of inquisitor judge Sparagna, the “scripta manent” operation’s instigator.

In this new issue there’s space for analysis on questions that were raised in the previous one, in particular the questions of cities, political alliances and internationalism, the history of the exploited’ movement and the continuation of an attempt at the analysis and elaboration of an anarchist theory of the State. Moreover we also treated other questions: a critical reflection of the concept of consistency; another one on survival in urban spaces and the changes that the latter undergo; an article of analysis on technology, in particular robotics, from an ecological point of view and in terms of its social and antisocial consequences. We dedicate an important part to the issue of “war”. With our often bitter tone and polemic articles we always welcome discussion and growth within the revolutionary anarchist movement.

— La finestra sul porcile (“A window on the pigsty”)

— In nome della coerenza (“In the name of consistency”)

— Una storia sinistra (“A story on the left”)

For copies and contacts: vetriolo@autistici.org