[USA] Of Indiscriminate Attacks and Wild Reactions
An Anti-Civ Anarchist Engages with ITS and Atassa, their Defenders and Their false Critics 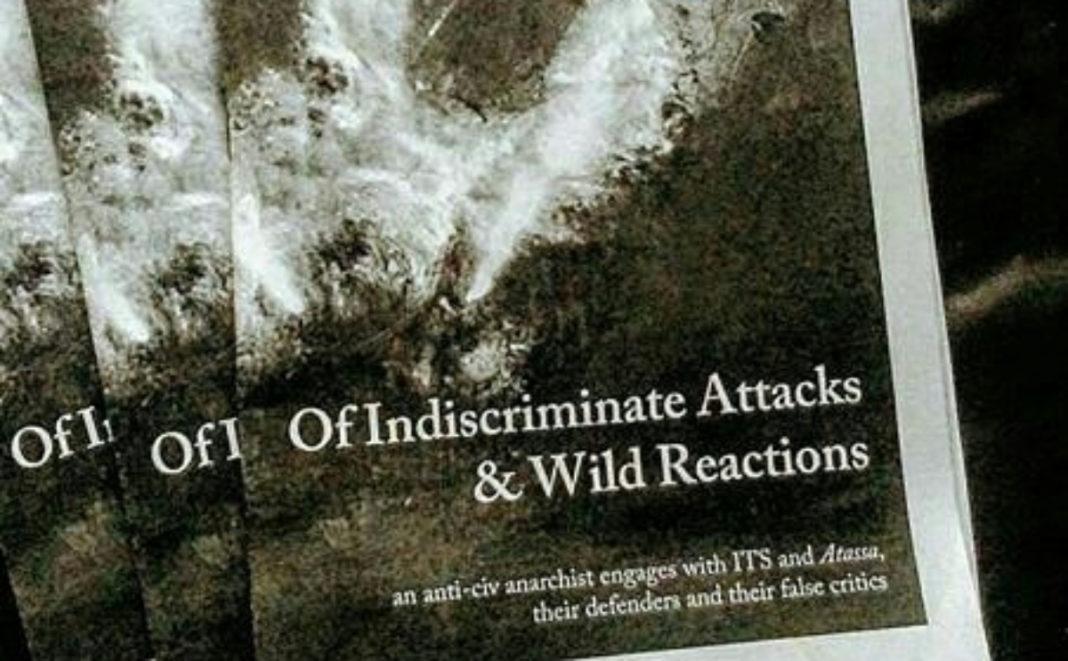 The following is the introduction to a short book critiquing so-called “eco-extremism” in Mexico, and those in support of it in the United States. To read two essays on the subject already published on IGD, go here.

Author’s Note to IGD readers: This essay was written a year ago, in haste. It was prompted by the escalation in 2017 of conflict between insurrectionary anarchists and proponents of a new school of purportedly anti-civilization ideology known as “Eco-Extremism”, both in Mexico and the US. This conflict was signaled in part by the appearance of a US journal called Atassa: readings in Eco-Extremism, which presented ideas and writings associated with the armed struggle group known as Individualidades tendiendo a lo Salvaje, abbreviated ITS but most often translated from the Spanish as Individualists Tending toward the Wild (a group with a history stretching back to around 2011).

Some of you will remember the publication around the same time of two brief pieces of news/criticism on It’s Going Down by Scott Campbell (“There’s Nothing Anarchist About Eco-Fascism,” and “Not Our Comrades: ITS Attacks on Anarchists”) which also dealt with this conflict. These pieces appeared in the wake of ITS claims of responsibility for various apparently misogynistic or random murders, physical attacks on anarchists, and a ramping up of reactionary rhetoric on the part of the mysterious and media-savvy group. Fast forward to recent weeks, and a slew of the online Egoist milieu has issued its own analyses and condemnations of ITS, Atassa, and Eco-Extremist ideas in what appears to be an ongoing fallout.

Of Indiscriminate Attacks and Wild Reactions has been submitted to IGD primarily for the insights it contains which are lacking in the aforementioned critiques. Staunchly anarcho-leftist or egoist critiques may include some worthwhile elements in and of themselves, but have largely failed to comment on many of the most vital issues involved for this author.

Furthermore, it is worth mentioning that the present essay, along with an ITS-authored response called “Against the World-Builders,” disappeared without explanation for several months from the catch-all archive site The Anarchist Library, before very recently being restored under pressure. In the ITS response, the proponents of Eco-Extremism double down on their rapey psychopath stances, and misrepresent the arguments of the present essay. For example, they claim that the author, like Scott Campbell, has defined ITS as a “eco-fascist” phenomenon, and suggest, comically, that any such critic must be an adherent or defender of Christianity and/or pacifism. A careful reading of the essay and its substantial discussions of fascism, morality, and violence will see that these charges are the inaccurate, self-serving, hamfisted pronouncements of opportunists.

Since last year, interest in the journal and esteem for Eco-Extremism as a viable anti-authoritarian/anti-civilization tendency have waned considerably. As a clash of personalities/egos, the conflict might have been even more mundane and beside the point than the average (and at least one egoist detractor has openly referred to the seemingly spectacle-thirsty ITS as a “semi-fictitious” band). However, after the review of the first issue of Atassa which constitutes the first few sections of Wild Reactions, the meta-discussion of the issues involved remains relevant, and may even become more so in the coming years of climate chaos and violent upheaval.

This essay provides preliminary remarks for deeper explorations yet to come related to anarchist topics such as: green anarchism and its possible relationship(s) to reactionary or fascistic ideology (defined in the piece), the false dichotomy between anti-fascism and the attack on civilization, the various nuances and conflicts on the terrain of post-left interpretations, and critiques of armed struggle, anthropology, science, morality, Leftism, nihilism, patriarchy, and civilization. My hope is that this work reaches, via IGD, a broader audience who are engaged in contemporary social struggles but who seek more fundamental insights on society, industry, hierarchy, anarchy, ecology, and resistance.

Below you will find the table of contents, an excerpt from the introduction (footnotes removed for the purposes of this promo), and the back cover quotation of the pamphlet version.

For your reading pleasure: the anti-civ, anti-fascist essay that basement trolls, self-loathing techie edgelords, “nihilist” merchandizers, and gatekeepers of internet infrastructure really didn’t want you to read, having done their best to smear and suppress it.

one of the Edelweiss Pirates, Summer 2018

Table of Contents:
[a specter is haunting the anti-civ movement or some shit]
- “The Return of the Warrior”
- Code for the Armored Leviathan
- “The Indiscriminate Attack”
- Code for Rape
- “Misanthropy”: code for Misogyny
- Anthropology
- Morality
- Puritanical Nihilism
- There is No Eco-Fascism
- The Only Terrorist is The State (and its Little Helpers)
- Green Anarchy (has Failed a Lot of People)
- We Don’t Get to Choose What to be
- We Get to Choose What to be

Dedicated to the memory of the hikers recently murdered in Mexican territory, and to Lesvy Rivera, Heather Heyer, and Brad Will