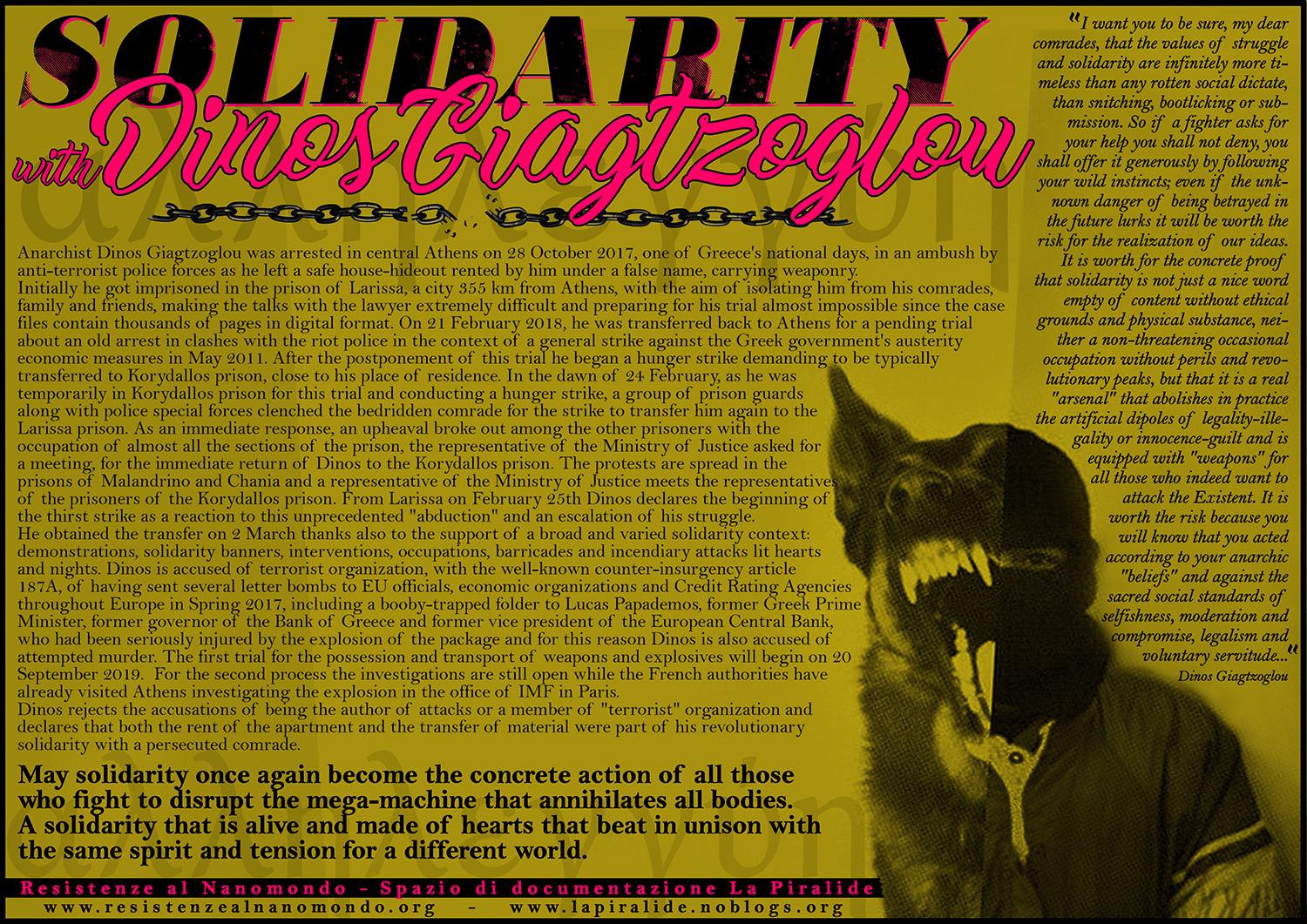 Anarchist Dinos Giagtzoglou was arrested in central Athens on 28 October 2017, one of Greece’s national days, in an ambush by anti-terrorist police forces as he left a safe house-hideout rented by him under a false name, carrying weaponry.

Initially he got imprisoned in the prison of Larissa, a city 355 km from Athens, with the aim of isolating him from his comrades, family and friends, making the talks with the lawyer extremely difficult and preparing for his trial almost impossible since the case files contain thousands of pages in digital format.

On 21 February 2018, he was transferred back to Athens for a pending trial about an old arrest in clashes with the riot police in the context of a general strike against the Greek government’s austerity economic measures in May 2011. After the postponement of this trial he began a hunger strike demanding to be typically transferred to Korydallos prison, close to his place of residence.

In the dawn of 24 February, as he was temporarily in Korydallos prison for this trial and conducting a hunger strike, a group of prison guards along with police special forces clenched the bedridden comrade for the strike to transfer him again to the Larissa prison. As an immediate response, an upheaval broke out among the other prisoners with the occupation of almostall the sections of the prison, the representative of the Ministry of Justice asked for a meeting, for the immediate return of Dinos to the Korydallos prison. The protests are spread in the prisons of Malandrino and Chania and a representative of the Ministry of Justice meets the representatives of the prisoners ofthe Korydallos prison.

From Larissa on February 25th Dinos declares the beginning of the thirst strike as a reaction to this unprecedented “abduction” and an escalation of his struggle. He obtained the transfer on2 March thanks also to the support of a broad and varied solidarity context: demonstrations, solidarity banners, interventions, occupations, barricades and incendiary attacks lit hearts and nights.

Dinos is accused of terrorist organization, with the well-known counter-insurgency article 187A, of having sent several letter bombs to EU officials, economic organizations and Credit Rating Agencies throughout Europe in Spring 2017, including a booby-trapped folder to Lucas Papademos, former Greek Prime Minister, former governor of the Bank of Greece and former vice president of the European Central Bank, who had been seriously injured by the explosion of the package and for this reason Dinos is also accused of attempted murder.

The first trial for the possession and transport of weapons and explosives will begin on 20 September 2019.

For the second process the investigations are still open while the French authorities have already visited Athens investigating the explosion in the office of IMF in Paris.

Dinos rejects the accusations of being the author of attacks or a member of “terrorist” organization and declares that both the rent of the apartment and the transfer of material were part of his revolutionary solidarity with a persecuted comrade.

May solidarity once again become the concrete action of all those who fight to disrupt the mega-machine that annihilates all bodies.
A solidarity that is alive and made of hearts that beat in unison with the same spirit and tension for a different world.

“I want you to be sure, my dear comrades, that the values of struggle and solidarity are infinitely more timeless than any rotten social dictate, than snitching, bootlicking or submission. So if a fighter asks for your help you shall not deny, you shall offer it generously by following your wild instincts; even if the unknown danger of being betrayed in the future lurks it will be worth the risk for the realization of our ideas. It is worth for the concrete proof that solidarity is not just a nice word empty of content without ethical grounds and physical substance, neither a non-threatening occasional occupation without perils and revolutionary peaks, but that it is a real “arsenal” that abolishes in practice the artificial dipoles of legality-illegality or innocence-guilt and is equipped with “weapons” for all those who indeed want toattack the Existent. It isworth the risk because youwill know that you actedaccording to your anarchic”beliefs” and against the sacred social standards of selfishness, moderation andcompromise, legalism and voluntary servitude… “ – Dinos Giagtzoglou 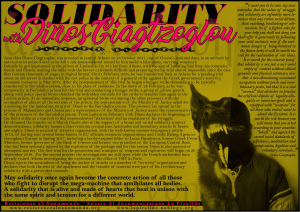