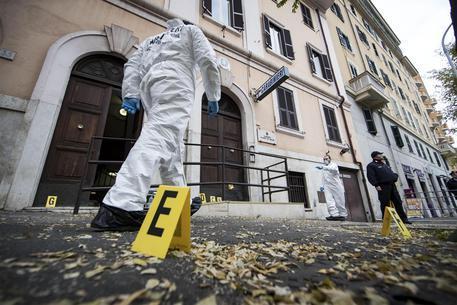 We have decided to take our lives into our own hands by breaking the oppressive peace that surrounds us.

On the night of the 6th to the 7th of December we placed a steel thermos containing 1.6kg of explosives outside the carabinieri barracks in the San Giovanni district in Rome.

Our attentions have turned to the main guardians of the deadly order of capitalism: the police. Without them, the privileges, the arrogance and the wealth accumulated by the owners would be nothing. Because they have always had the function of repressing, jailing, deporting, torturing and killing those who by choice or necessity find themselves outside their law.

The fight against the state is not simple and cannot be reduced to magic formulas. But the objectives are there and you cannot always make theories and talk of convenience. Every individual free by desire and necessity puts theory into action, here and now. There is no delegation in the struggle for freedom.

We must not allow ourselves to sink into despair that in these times is instilled in large doses.

What would have been in these years if an incendiary minority had not picked up the torch of anarchy? If these comrades had waited for better times? The president of the European Commission whose Christmas was ruined knows something about this[1]. The vampire of Equitalia [state-owned tax collection agency], with his some mutilated claws, know something about this. The sorcerer of Ansaldo Nuclear must have felt the heat from the torch of anarchy in his legs.[2]

Today we take the torch of anarchy, tomorrow it will be somebody else. As long as you do not turn it off!

Who wants to watch will continue to watch. Who wants to justify politically not acting will continue not doing so. We are not waiting for any train of hope, we do not wait for better times. Conditions move with the confrontation. The movement is such if it acts, otherwise it stands still. The liberation of the individual from authority and exploitation is carried out by those directly concerned.

Yet those who attack are driven by a contagious urge. This means propaganda of the deed.

Against cops, politicians and their stooges. Against engineers of science and industry. Against all masters, but also against all servants. Against the ranks of honest citizens of the prison society.

We are not interested in wasting time and energy in the critique of reformists… Although we do not consider ourselves an elitist minority, as anarchists we have our actions and our claims. Our propaganda. Every individual and affinity group develops and increases their experiences in fraternal bonding. Without any specialization and without wanting to impose a method. We have chosen this. Let everyone find their way through action. The structured hierarchical organization in addition to killing the freedom of individuals is also more vulnerable to the reaction of oppression.

The informal anarchist organization is the instrument that we deem most appropriate at this moment, for this specific action, because it allows us to hold together our irreducible individuality, dialogue with other rebels via the claim of responsibility and finally the propaganda conveyed by the echo of the explosion.

It is not intended to be an absolute and definitive tool.

An action group is created and developed through knowledge, through trust. But other groups and individuals can share, even temporarily, a project, a debate, without knowing each other in person. They communicate directly through action.

Direct destructive action is the logical response to repression. But not solely. Anarchist praxis is also a revival, a proposal that goes beyond solidarity, breaking the spiral of repression-action-repression. Solidarity actions are impotant, but we cannot confine ourselves to the critique, however armed, of some oppressive operation or trial.

The imprisoned comrades are part of the fight, they give us a side and give us strength. But it is necessary to act and organize. The advance of technological development, the policies of control and repression do not give much room for evaluation on what to do. Life and repression in the metropolis are being redesigned. Moving and acting can become more and more complicated.

Unlike the ‘clashes’ often announced by a certain antagonism, unpredictability is the best weapon against the society of control. Hit where they do not expect you. Today we struck in the heart of the militarized capital to challenge the delusions of security. Tomorrow, who knows, maybe in the suburbs where you least expect it. We do not make truces, we chose our own times. This has always been the principle of the metropolitan guerrilla. With the difference that the conspiracy of informal cells does not know hierarchies or strategic directions. And that’s why it’s even less predictable.

The Italian State is at the forefront of repressive and military policies. By geographical location it is often called upon to do the dirty work to defend the borders of Fortress Europe.

The latest agreements between Minister Minniti[3] with the bloody Libyan colonels are recent evidence. Reaching the number of slaves necessary, ‘let’s take advantage of them at home’ as well as remaining popular is still a good bargain.

Last night we brought the war to Minister Minniti’s house. The ones in uniform who are directly responsible, the ones who obey in silence and in silence they die, they have received a small taste of what they deserve.

With this action we launch an international campaign against the representatives, structures and means of repression. Anybody can contribute to this campaign using whatever tools they consider to be the most appropriate, contributing to the discussion.

We dedicate this action to the Argentine anarchist kidnapped and murdered by the Benetton hit men. May the day come when the oppressors will finally disappear from the face of the earth.

[1] Refers to a letter-bomb sent in 2003 by an FAI cell to the home of European Commission president Romano Prodi. Prodi opened the parcel in his home, but the subsequent explosion did not result in any serious injuries.

[2] Refers to the 2012 attack against Ansaldo Nuclear chief executive Roberto Adinolfi by Olga Cell FAI-FRI in which Andinolfi was knee-capped.