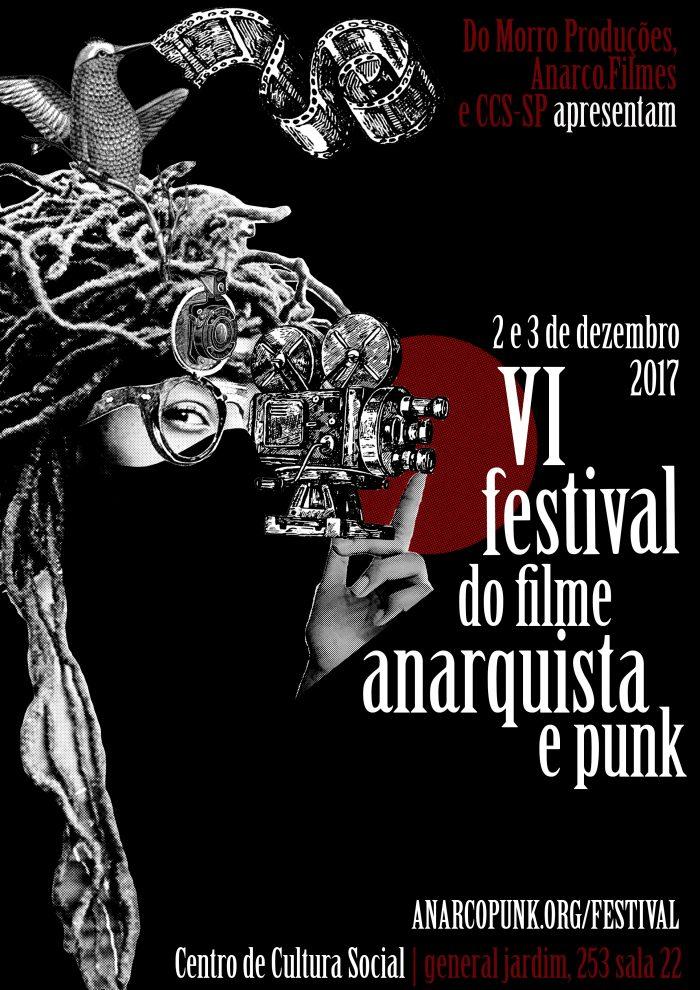 We came to the sixth year of the Anarchist & Punk Film Festival of São Paulo, with the proposal of visibilizing audiovisual productions and themes related to the counterculture of punk and anarchism, as well as guiding the use of this important tool in our struggles. This year the Festival will take place in the Centro de Cultura Social, an autonomous space of much history and contribution to anarchism in the city.

Documentary in memory of Fabian, Gaston, Ignacio, Daniel and Robert, killed during a gig where the band Doom performed in Chile. Every April 16th at Alameda 776, punks, friends and relatives keep reminding them, and this record shows a little of what happened on that fateful night, as well as the activities in memory of them.

A small record in memory of Mauricio Morales, an anarchist who died in 2009 as a result of an explosion of a bomb he was carrying, and whose death was used as an excuse for a criminal operation of criminalization against squatters, anarchists and punks in Chile. This operation, which became known as Caso Bombas, was later dismantled, given the numerous false evidence presented by the prosecution.

Self-managed and counter-informative project of joint collaboration and mutual support, of distinct individuals and spaces of Quito, Ecuador, that in different environments has resisted and acted there. This video has several themes within the counterculture, such as lifestyle, action, creation and criticism. Starting from a critique common to the capitalist system and imposed heteronorm, initiatives and ideas are born to seek different ways of fighting it.

Autonomy, horizontal relations, do-it-yourself, sense of community, networking, dialogue, respect, mutual support... In images, senses and words, a bit of the second edition of No Gods No Masters Fest in Itanhaém, São Paulo.

15:20 | Workshop: A practical guide Anarchist and Punk for a Digital Self-Defense, by HACKistenZ

For us, anarchists and punks, it is more than necessary to communicate quickly and safely. Because we need to plan actions and strengthen our ties and our resistance. However, we are being watched. And worse, we are under a kind of quiet and discreet surveillance. We do not see clearly who watches over us. Because these are very well camouflaged on the internet and are even embedded inside our computers and our cell phones.

We live in times that the fight against surveillance must be integrated into our daily habits. Just as we prepare our food before we eat it, we must also encrypt our information before sending it. Just as we choose which clothes to wear, we should also be concerned about which software to use. Just as we do not walk around the streets, exposing information about our lives and the lives of comrades and loved ones so everyone knows, we should not do it in cyberspace as well.

If we are not yet protecting ourselves from this whole vigilance, we must change our habits now! Even if we do not achieve full protection, we will at least hinder the lives of those who watch over us. This will be our workshop: “An Anarchist and Punk Practical Guide to Digital Self-Defense”. Basically we will discuss the following topics, Autonomy in front of the software, Network anonymity, Cypherpunks (encryption) and Digital disobedience. Each moment of the debate we will learn together the fundamental ideas, what are the main steps to be taken by us, what programs to use and how to use them.

Pedaling the night through the dangerous streets of East Los Angeles, the Ovarian Psycos use their bikes to confront the violence in their lives. Guiding the group is founder Xela de la X, mother and poet M.C., dedicated to recruiting indigenous and black women for the movement. The film tells the story of Xela, showing her struggle to find a balance between activism and her 9-year-old daughter; of Andi, who far from his family walks toward the leadership of the group; and Evie, who, despite the poverty and concerns of her Salvadoran mother, discovers a new confidence.

A film about the world today, about the need for a revolution, a mass uprising against the exploiters, so that the financial system can be rethought. An anarchist view of the chaos we need for this change to occur.

Directed by Zillah Minx, member of the anarcho-punk band Rubella Ballet, the documentary depicts some of the ideas and stories of punk women who have lived and participated in the English punk/squatter scene, such as Poly Styrene (X-Ray Spex), Eve Libertine and Gee Vaucher (Crass), Olga Orbit (Youth in Asia), among others.

The punk/anarchist scene in the northeast of Brasil has always had as strong characteristic the accomplishment of activities with support and participation of groups/bands of diverse localities of the region, joining efforts, dreams and movements. This year the Days of Punk Culture, with activities in Fortaleza (Ceará), Natal (Rio Grande do Norte) and Campina Grande (Paraíba). This documentary is a small record of what happened in the city of Fortaleza.

Reports, images and experiences of this self-managed squat that resisted in the city of Fortaleza, in a documentary made by the people who passed through the house and contributed to its existence.

How much does this “more love” discourse not hide a demand for passivity and acceptance of social inequalities? While capitalism tortures, it asks for love in return. Sick of this false love, we have to exercise our hatred. It is necessary to nourish class hatred. The film, in a crude and metaphorical way, proposes a reflection on this phrase that inhabits the discourse of maintenance. More love for whom? War on the system!

Documentary that portrays a globally interconnected political and musical scene, built on autonomy, solidarity and the do-it-yourself idea that declares war on capitalism and mainstream culture. Between squatters in Barcelona, ??antifascists in Moscow, inhabitants of self-managed trailer parks, girls from Swedish punk bands, and other groups from different countries, the film tells a bit about members of this scene, their motivations, shared aspirations and ideas of utopia.

16h30 | Debate: The practice of cinema in the age of digital isolation, with Daniel Fagundes, Sheyla Maria Melo and Gabriel Barcelos

The cine clubs and shows appear as spaces where people gather to watch movies collectively and often discuss and reflect together on the productions and themes that surround them. The internet era, however, at the same time as it has enabled and facilitated contacts, has generated more and more isolation in this sense: instead of prioritizing these collective moments, the act of watching movies becomes more and more something to do in personal computers and mobile, often individually. How are cine clubs inserted and their practice in this context?

Experimental documentary that proposes a different approach on the subject of gentrification and its results for the cities and for the people who live in them.

The documentary looks at the ideological and military struggle of Kurdish women in Rojava, Shengal and Qandil, as well as the history of the women’s movement that comes with the PKK. From Paris to Sinjar, Kurdish women are taking up arms against the Daesh to defend their people. A group of women who refuse to be victims and remain strong with other women who are abused.

*Release of the Anarchist Film Festival and Punk Fanzine #1 | After 6 years of organizing the Festival, we have put together some of our concerns, questions and visions about anarchist audiovisual, practice and video production and the use of this tool in our struggles to share and broaden debates on the theme. Zine will be available on the stool during Festival days!

*Exhibition | Anarchist & Punk Film Festivals around the world | As like in all editions of the Festival, will be exposed images of posters of festivals of anarchist film and punk world outside.

*Exhibition | Crass and do-it-yourself on the collages of Gee Vaucher (England) | Exhibition of collages and arts by Gee Vaucher, artist, former member of the band Crass and resident of the Dial House community in Essex/England, which were made during the band’s lifetime for the covers, inserts and materials produced at the time .

*Vegan Foods and Snacks by No Cruelty Vegan Foods