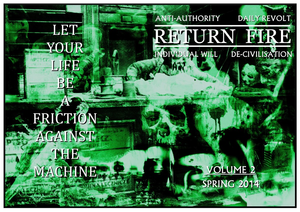 Here’s the online version of Return Fire vol.2, dated Spring 2014. (See here for vol.1). Inside these pages, there’s a mix of news, analysis, artwork, plant profiles and more; some of which are editorial, some other comrades’ recent work as well as our own translations, and some the usual reprints. For example, ‘I Didn’t Want to be a Proud Worker’ is Gabriel Pombo Da Silva’s reminiscence on generous illegality, which appeared as an introduction to the French edition of Huye, Hombre, Huye by Xosé Tarrío González. ‘The Essence of Modern Schooling’ follows the development of the domesticating “education” principle in industrial society by Jan D. Matthews. Plan for Europe’s Biggest Children’s Prison is coverage from the U.K.’s latest counter-information page In The Belly of the Beast, while L’Amour Civilisé, exposing the impoverished social role of coupledom, is out of the journal La Mauvaise Herbe.

This time the Poems for Love, Loss & War are from such insurgents, iconoclasts and adventurers as Kelly Pflug-Back, ‘Eat’, Ron Sakolsky, and Biófilo Panclasta. Rebels Behind Bars features court case news, updates on police crackdowns, and prison letters on topics from psychiatric incarceration to animal liberation, from the Mayday tradition to State surveillance.

We compiled a smattering of Global Flash-Points in riots, sabotage and other direct action during the last part of 2013 and beginning of 2014, and some more or less recent historical legacies in Memory as a Weapon; the siege of Sidney Street in 1910’s London and the multi-lingual Dandelion news-sheet’s piece on migrant revolt in Europe following the so-called “Arab Spring”.

In ‘Gravediggers of Society’, some destructive queers review Lee Edelman’s theory next to that of Guy Hocquenghem (also passing by Jacques Camatte), found in the first issue of Bædan and transcribed.

Let this be our contribution to the multi-form front against civilisation and authority, and especially to the month-long mobilisation this December called by Chilean anarchists (to commemorate and agitate around the death of Sebastián Oversluij and capture of Tamara Sol Vergara).