Since The Bristol Riots
Communiques from the FAI, ELF and other attacks (April 2011 – October 2014) 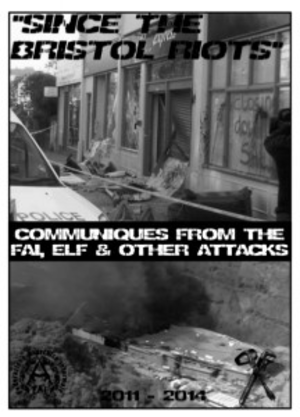 “Since the Bristol Riots”, is a collection of communiques from the Informal Anarchist Federation (FAI), Earth Liberation Front (ELF), and other anonymous attacks in the Bristol area since the riots in April 2011 until October 2014. The communiques include attacks targeted against police, banks, prisons, military, security services, courts, state, church, fascists, media, communications infrastructure, corporations and more. Totaling 96 pages, included is a selection of over a dozen articles related to this time frame and context, such as reports of the Stokes Croft riots and recent police repression against the broader anarchist movement as they investigate the attacks.
For antagonistic struggle, Person(s) unknown
personuknown.noblog.org
DOWNLOAD PDF: “Since the Bristol Riots” – Communiques from the FAI, ELF and other attacks (2011-2014)