"ZAGOVOR NA EDNAKVITE" - ANARCHIST COUNTERINFORMATION WEBSITE [MACEDONIA]: ABOUT THE UNACCEPTABLE SILENCE AND THE FEAR OF CRITIQUE... 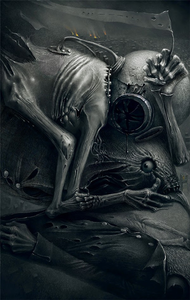 We never had an intention of making a news agency out of our blog by posting only news and translating statements, because we’re not journalists or translators, but anarchists. We do our work on our counter information platform due to affinity with the struggle, which makes us participants in the anarchist struggle, not spectators or reporters of the spectacle. That is why we cannot be satisfied with mere translating and waving banners of support for the deeds of our comrades, because, being a part of the struggle and being anarchists, we feel the urge to critically observe what’s happening in the actual struggle, where it is going and where we stand in it (as well as the actions undertaken by our comrades) and thus enrich the anarchist struggle with a flow of ideas, so as to escape the momentary rigidity and silence of the anarchist counter-information space.

The past months were very intense for the struggle in Greece, but the turmoil of events left many questions raised. Unfortunately, very little discussion about these issues was seen on the counter-information space and it seemed as though any critical approach to the events in Greece was “forbidden” or ignored, both by most counter-information portals and by the comrades which took part in the events. A behavior most unexpected within anarchist tensions and one that should be a subject of separate critique.

Of course, there has to be support and solidarity with whichever struggle our comrades abroad have taken upon. (Note that we said comrades, which means we don’t mean support for any individual or group that claims themselves anarchists, or even less communist and other leftist crap. We share our affinity with the individualist and nihilist tension of anarchy and it is the anarchists of praxis belonging to that tension that we share our solidarity with. Many of the counter-info portals choose to “cover” the actions and statements of so many different groups, from fighters for the autonomy of the Kurdish people, communist groups, Marxist urban guerillas, to nihilist groups and FAI/IRF cells. We cannot understand how all those separate tensions, most of whom are hostile against each other, can find common space on the same anarchist counter-info portals. Of course, this too is a whole separate issue that needs to be discussed.) We also agree with the notion of some comrades that in some sensitive moments, such as during a long and perilous hunger strike, we should be more careful in our discourse and have in mind the fragile position of the hunger striking comrades, but that doesn’t mean that we should keep quiet when we see the basic premises of anarchy being abandoned. We disagree with those same comrades when they say that timing must be taken in consideration and that all discussion should be made only after the hunger strike had ended. Who is to decide when the time is right for critical discussion, especially when some of us certainly felt that it should be discussed here and now? The solidarity and support for the struggle must be accompanied by a critical approach, because those are inseparable aspects of the anarchist struggle. We fight against conformity of thought – we cannot allow reproducing it within our own circles.

“For us the feeling of affinity is primordial in our struggle. We do not consider ourselves as “Political Prisoners” and do not attack the institutions of Power to improve society.” – Amélie Pelletier and Fallon Poisson

We already published a short comment about the contradiction that we see in anarchist nihilist urban guerillas supporting a struggle which demands abolition of specific laws. We wish here to develop those reflections furthermore, since some of those anarchists are comrades of ours, with whom we share both friendship and affinity and thus we feel obliged to pose these inevitable questions, same as we expect them to honor us with their own reflections.

We do not dare to judge, sitting from the comforts of our position, the choices a prisoner must make in order to survive the hell of captivity. We realize that some specific laws make the prisoner’s life more unbearable than some others and that often times the prisoner would feel forced to make some choices that he wouldn’t make outside the walls, such as to surrender his own life in the hands of those in Power and wait for their mercy and recognition. Every prisoner’s voice of outrage and resistance is to be respected, for every small struggle he wins makes the chain on his neck a little less heavy and adds up to the dignity Power has attempted to strip him off.

But, we don’t talk about the choices of prisoners here. We talk about the choices of incarcerated nihilist urban guerilla warriors, whose actions and words inspired numerous attacks on Power throughout the entire world, who made pacts with no one and accepted no one’s mercy, who remained untamed even under the lashes of their captors and who inspire many comrades to this day. We talk about their position regarding not just any prisoners’ hunger strike, but a hunger strike organized by a political body at the initiative of members of communist and anarchist organizations with clear political motives (reflected even in the very choice to begin the strike right after the election of a leftist government).

We have full understanding for a personal prison struggle, such as the hunger strike of the CCF for the release of their relatives or Mandylas’s hunger strike for his release from prison, both of which we supported. Those struggles are clearly of a more personal nature and they didn’t for one bit pose as anarchist struggles. The problem we see in comrades supporting the hunger strike for the abolition of laws is that that struggle was being presented as an anarchist struggle, as a struggle that paves the way for a liberated society, as a means of fighting for freedom. There is no need to explain – or so we hope – where the contradiction lies when anarchists, fighting for a total destruction of the existent, use the only weapon they were left with when taken as hostages by the State – their bodies and their lives, for a reformist political cause, thus perhaps allowing themselves to be dragged into a political game conceived by leftist groups and individuals. The contradiction we see is when revolutionaries grown fond – deliberately or not – to a Marxist rhetoric, as well as communist guerillas are named comrades in statements issued by CCF and FAI cells. The contradiction we see is when the demands issued by those same “comrades” are being put in an anarchist context, with no critical approach. The contradiction we see is nihilist urban guerillas fighting side by side with Marxists and other enemies of anarchy and individual freedom, for the goal of demanding the State to abolish repressive laws (as if any other type of law has ever existed). Supporting an attempt to introduce institutional change. It is expected from leftist revolutionaries to include such means in their struggle. But, how can any anarchist who has renounced the State and its apparatus and lives to see them smashed finds himself supporting such a cause? And to what end?

We didn’t quite manage to understand the motives our comrades had when they decided to support the hunger strike for the abolition of laws. We are eager to hear their reasons. Yet, whatever the motives, one thing remains clear, at least to us: the whole background of the hunger strike for the abolition of laws had too much politics in it, and there’s no room for nihilists/anarchists in politics, as there’s no room for alliances between nihilists and politicians in anarchy. And if that was indeed a political game, let all who took part in it take responsibility for it. As the comrades from CCF once wrote: “Loving responsibility means not being afraid of being exposed, not to sell out yourself for the sake of an unwrinkled “good” public image. So, let all idols be torn down and first of all our own.”

And while we are at the subject of the DAK hunger strike, let us join the critique of “Des Ruines” – a critique long due – about the term political prisoner, often read in the words of the participants in the strike. Words have meaning. Words can liberate us and enslave us and thus we must choose them wisely. Political prisoner is a term the State and the ideology of domination favor, as its use divides the prisoners based on the nature of their “crimes”, thus implicating a moral distinction between “political” crimes and crimes that are “truly unlawful”. Intentionally or not, that distinction can result only in acknowledgement of the judicial system and justification of prison as a means of repression, which is why that term must be washed away from the mouths of anarchists.

Another thing that puzzles us is why was Spyros Mandylas’s hunger strike left marginalized? Why didn’t his hunger strike deserve the same solidarity as the DAK’s struggle? We realize that the story with the Thessaloniki anarchists must have a deeper background than the one we can see from here, but either way, some things need to be exposed. The comrade claimed 39 anarchists to be responsible for his incarceration. That is clearly a sensitive subject, we can see. But it is also a serious accusation, so how come no one spared a single word, to shed some light on the situation, if not to take a side? And even if we put his reasons aside, the comrade was on a hunger strike demanding his release for 54 days (!). Why did those that call him comrade keep their silence?

These are some of the questions and issues we think need to be confronted and answered, although this is not the first time they were raised. But for one reason or another, seems like most of the counter-info portals and some comrades avoid answering “problematic” questions. We see no reason why some important things that affect us all should be concealed in darkness. We are comrades in affinity and we expect straight truth, not diplomatic silence. We hope these issues that we raised, regardless of their sensitive nature, will finally meet some feedback.

Let our self-critique, the flow of thought be one of our weapons in confronting the all-existent. Stating the truth, facing our own actions and taking responsibility for them are all means of defying the dominating matrices of thought in a world of false images. Let us break that falseness and face our choices without the unease of doing so. Let us embrace the debate for the purpose of strengthening both our positions and our ties with comrades in affinity.

FOR A WORLD OF CONTINIOUS ATTACK AGAINST THE EXISTENT