Poland: “Free the Warsaw Three” — Fanzine about the anarchists arrested in Warsaw

Three anarchists were arrested by police in Warsaw, Poland, with the accusation of arson attempt on a police vehicle. They will be held in custody 6 months, waiting for trial, and they face up to 8 years of prison. The comrades denied being involved; one of them was seriously beaten by cops.

The accusations are: possession of explosives and the intention to use them by setting police car on fire. They are called terrorists by police and media, despite the fact that the arson didn’t actually take place. This accusations are quite serious — they face from 6 months to 8 years of jail. First hearings of the accused took place at District Prosecutor’s Office on 24th may. Marks of tortures were visible on their bodies. On 25th may, during prosecution session at district court, prosecution decided to hold them in custody for three months (on 18 th august that was prolonged to 6 months).

Since the beggining, each of the three is detained in isolation, they had denied the right to communicate with relatives and during the first week of detention none of them had access to a lawyer.

Mass media in the service of the state reproduce authorities propaganda. Witch-hunt begun, creating mass hysteria and the image of the country threaten by terrorism. By doing this, the authorities and their collaborators are trying to justify the implementation of the new so called anti-terrorism law. Significantly, just before the entry into force of the Act on 10th june, on 23rd may and 30th may in several Polish cities a series of false bomb alarms took place, leading to evacuation of sites such as the editorial office of the press and television, shopping mall and banks.

The wave of repression against the anarchist movement is rising. On May 23rd the police four times haunted one of Warsaw’s collectives involved in fighting the developer industry and empowering the struggle for the food sovereignty. Since then, the collective is constantly harassed by uniformed visitors. In Krakow, they searched the apartment and questioned a person who have set up a social media site ridiculing with irony the inflated police accusations. In Warsaw information multiply about police bothering people associated with the movement, and attempting surveillance of places that are important for the movement.

Almost at the same time, the police murder of Igor from Wrocław took place. No way to find there an immediate response and outrage of the multitude of politicians, journalists, police officers and terrorism experts. Almost no journalist will even sigh, when cops kill a man. Yet police killings are only the tip of the iceberg. Extortion, beatings, unlawful protection of the interests of influential people – every year among the 16,000 complaints against the police, authorities recognize only 5 percent. As a result of years of media selectivity and omissions, the police feels impunity.

The witch-hunt atmosphere of the campaign against the broad anarchist movement is building consent for repression and surveillance targeting social movements, that are fighting against the most influential interest groups in this country. The anarchist movement has been active, among other, in workers, tenants, ecological, anti-racist groups and the fight against land-grabbing. It acts without compromise for social justice, against the repression from business and political elites. Lack of social control over the police, for years allowed them to use uncontrolled violence against people fighting the system of violence in various fields.What we need at this moment is the firm stance of solidarity with the arrested people and against upcoming attacks from the state! On July 2, in Warsaw, picket of solidarity with the arrested was held. We also count on your solidarity actions in other cities. You can also help in the collection of funds to pay the lawyers and to financially support detainees.

WE WILL NOT BE INTIMIDATED

Free the Warsaw Three and all hostages of the state 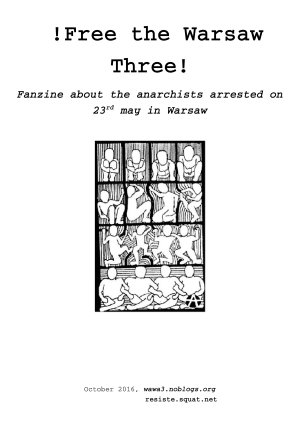