Italy: Issue 3 of the anarchist paper Vetriolo is out (winter 2019) 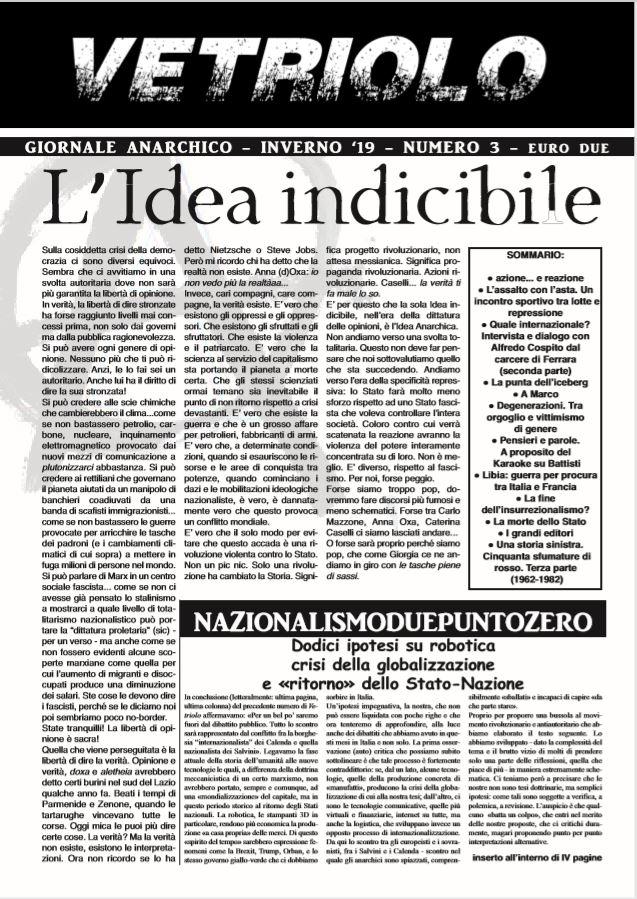 This is the fourth issue of ‘Vetriolo’. Four issues are certainly not a few for a publication such as this. Rather than accumulate and reinforce certitudes, we believe the paper has tried to corrode and crush them, as it posed new doubts and nourished old questions. Certainly not out of a mere taste for rhetoric or polemics, but because we think that there are always a lot of ‘knots to be untied’. At the same time we think that it’s necessary to reflect and analyse, a difficult task which is certainly not opposed to the corrosive demolition of certitudes; on the contrary it’s complementary to it. In these reflections and analyses we have always maintained that reality is not an incomprehensible enigma, contrary to what those who want to impose their resignation on us have always stated. So in this issue we also tried to analyse the current reality, and in particular we wanted to do so by proposing some hypotheses, besides carrying on the reflections and analyses which characterized previous issues with more or less extended theoretical articles alongside articles of agitation and topicality. To the readers their own considerations. We reiterate and remind, once again, that this paper is neither an aseptic intellectual product nor a container of opinions and points of view. Precisely because it doesn’t intend to close itself up in easy answers, shout solutions ready for consumption or brandish pre-arranged theses, this is an instrument which can imply a lively involvement with the ideas it affirms, and we always wish this is the case.

Contents:
– L’Idea indicibile [The Idea that cannot be said]
– Azione... e reazione [Action... and reaction]
– L’assalto con l’asta. Un incontro sportivo tra lotte e repressione [Pole vaulting. A sports competition between the struggle and repression]
– Quale internazionale? Intervista e dialogo con Alfredo Cospito dal carcere di Ferrara. Seconda parte [What international? Interview and talk with Alfredo Cospito from the prison of Ferrara. Part two]
– La punta dell’iceberg [The tip of the iceberg]
– A Marco [To Marco]
– Degenerazioni. Tra orgoglio e vittimismo di genere [Degenerations. Between gender pride and victimization]
– Pensieri e parole. A proposito del karaoke su Battisti [Thoughts and words. On the fuss about Battisti (a member of PAC, Armed Proletarians for Communism, he was accused of participating in the murder of a marshal, a police officer and a jeweller in the 1970s. After escaping from prison in Italy, he found refuge first in France and then in Brazil. He was arrested in Bolivia in January 2019 and he’s facing extradition to Italy)]
– Nazionalismoduepuntozero. Dodici ipotesi su robotica, crisi della globalizzazione e «ritorno» dello Stato-nazione [Nationalismtwopointzero. Twelve hypotheses on robotics, the crisis of globalization and the ‘return’ of the nation-State]
– Libia: guerra per procura tra Italia e Francia [Libya: proxy war between Italy and France]
– La fine dell’insurrezionalismo? [The end of insurrectionism?]
– La morte dello Stato [The death of the State]
– I grandi editori [Big editors]
– Una storia sinistra. Terza parte (1962–1982) [A sinister story. Part three (1962–1982)]

2 euros per copy. For distributors: 1.50 euros per copy for orders of five and more copies. Postal fees in Italy: 1.30 euros (up to 2 kilograms). Free for prisoners. Issues 0, 1 and 2 are still available.

[Translated by act for freedom now!.