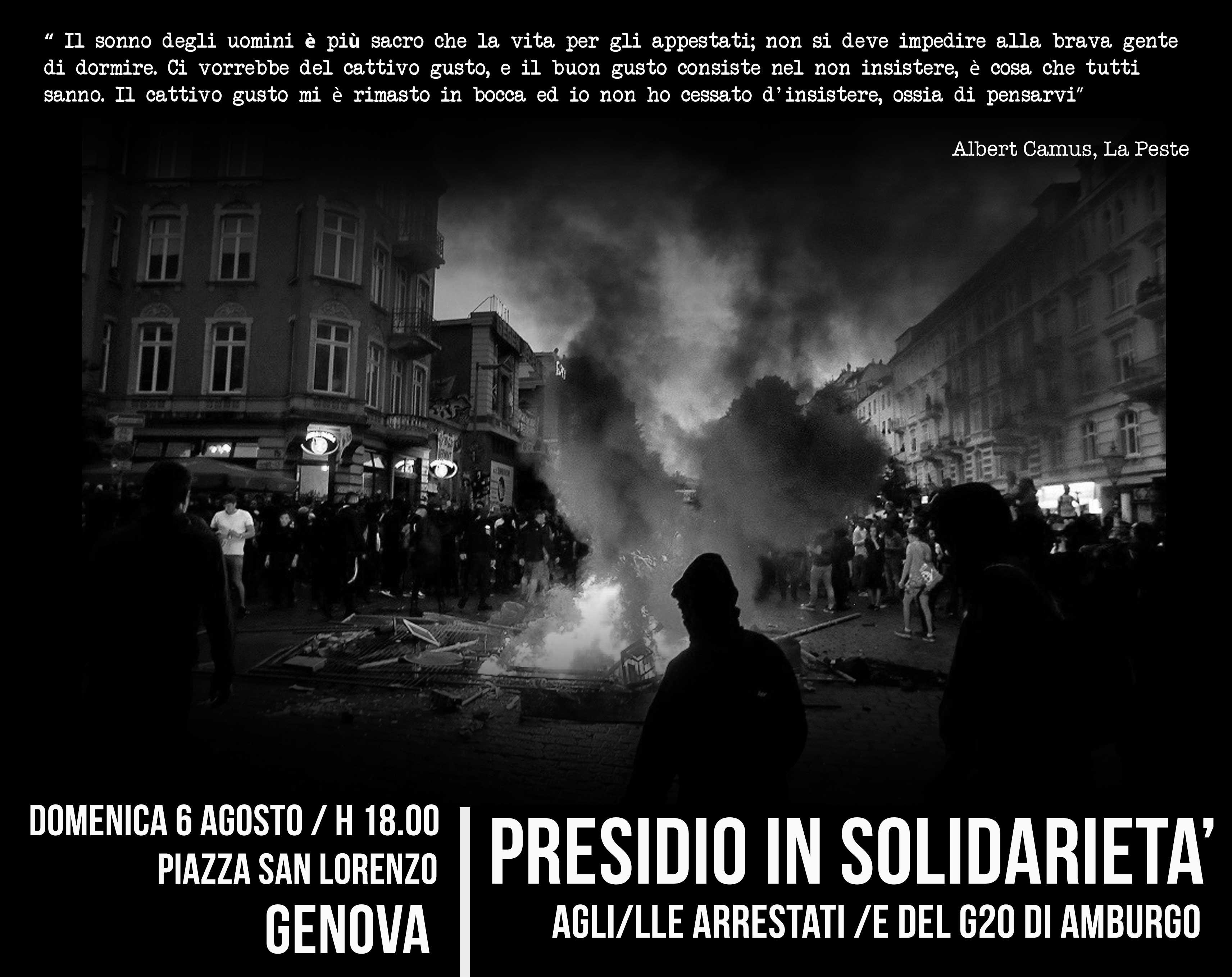 A CONTRIBUTION TO THE EVENT

The Plague is raging, while the good people are sleeping

The quiet was disturbed

A CONTRIBUTION TO THE EVENT

“For the plague-stricken their peace of mind is more important than a human life. Decent folks must be allowed to sleep easy o’ nights, mustn’t they? Really it would be shockingly bad taste to linger on such details, that’s common knowledge. The bad taste remained in my mouth and I’ve kept lingering on the details, brooding over them.” Albert Camus, The Plague

On July 7th, 2017, begun the G20, another international summit, as many are held during the year, when a handful of world leaders meets to sit around a table, to pleas each other, sipping fine wines, talking about how to split the pillage of the lifeless planet that we live on. So, it happens that an Europe-wide neoliberal, Macron, shakes the hand with the genocidal dictator Erdogan in a well-furnished lounge while they shell agree on the strategies of suppression and violent repression of migratory transit routes from Turkey to west Europe; it happens that a nice conservative, Merkel, laughs at jokes of a racial rapist, Trump, while they decide how to devastate the ecosystem and poison the atmosphere beyond the point of no return; it happen that an authoritarian nationalist oligarch, Putin, receives a pat on the shoulder from the puppet Gentiloni while the first one gives few cubic meter more of methane in exchange of silence on the occasion of a next Crimea, or the next homophobic and murderous law. All this happens, each day in the year, all year long.

The Plague is raging, while the good people are sleeping

Many years have passed since the riots in Genoa, Seattle, Heiligendamm, they think there is nothing to fear. That protest movement is dead, they say. The notorious “globalization”, which in those years was the threat of an uncertain future, today it is the present, so present that is almost impossible to imagine a life without it. Everything we use, we eat, drive o dress, everything is produced in slavery elsewhere, by others that we do not perceive and recognize as person, we are not interested in their destinies, they can not affect our dormant consciences. However, this time the world leader choose to meet each other right in the downtown core of Hamburg, almost as a challenge. A city with rich history of struggles for social justice, which periodically celebrate the autonomy of several neighbourhood with revolts and riots. And in one of those neighborhoods, the Schanzenviertel, the powerful will meet to celebrate their farce.

The challenge is accepted, and months before the Summit started a mobilization that suggested a will to oppose with determination, a large participation was announced. In the days before the Summit, comrades from all over Europe met each other in the German city, while the police immediately put into practice a policy of zero tolerance: the houses are searched, the preventive arrests of “usual suspects” started, the camp where the people from outside gathered was evicted with force. The repressive strategy that the police intended to put in place becomes even clearer during the protest of July 6th, when the anti-riot police attacked from several points, even before people moved a step forward, forcing them to run through teargas in the port area. The efficiency of repressive machinery seemed inviolable and everything indicated that the three days will be continued without the peace being disturbed, while the tyrants and dictators will enjoy in the excellent program, planned between a gala dinner and an aperitif with view.

However, on Friday, July 7th, something seemed to change since the morning, when luxury cars and diplomatic vehicles were burning in sever parts of the city, creating dense columns of black smoke. Spontaneous actions of autonomous groups came in succession during the day, several unauthorized demo crossed the streets and symbols of the capital were attacked. The police was not able to react in time, reinforcement from nearby towns was demanded, and squads of cops came to Hamburg in columns of cars on the highway or in helicopters. But, it was not enough. Groups of people in affinity begun to converge toward the Schanzenvierte, just the neighbourhood where the Summit was taking place, in Messe (Fair). Barricading, clashes with cops, they are forced to leave the neighbourhood for hours. Bank and supermarkets was assaulted, streets was occupied. “It seemed to be in Aleppo”, a scandalized citizen will say the next day, who probably never visited the Syrian city. Precisely this Aleppo, devastated by the bombs of Putin, Erdogan and Trump, who just a few meters away from this worried citizen were deciding about the future of Syria and who knows what other future wars.

The quiet was disturbed

During the revolt against G20 in Hamburg, one of our comrades, Riccardo, was arrested, and currently he is imprisoned in prison of Billwerder The pretrial detention was confirmed for him and for other 35 rioters, 5 of them Italian. We are not interested in details, we are not interested in define how. We know when and we know why. Because the German police apparatus, humiliated by the burning streets, with special squads and with guns in their hands tried to rehabilitate its image arresting en mass those who stayed in the streets, with intention to struggle with determination. In front of uncontrollable anger, Power reveals its true face and it expresses it in all its brutality.

The historical moment in which we live pushed the responsibilities and the consequences of the capitalist system for our lives to the extreme. Faced with the progressive disintegration of the everyday life (now made of alienation, exhausting and badly paid jobs, fake human relation and filtered by omnipresent technological gadgets) that goes hand in hand with unrecoverable destruction of planet that hosts us, we believe that action and resistance are not only defensible, but urgently needed as well. The solidarity with Riccardo and with all prisoners arrested during G20 in Hamburg becomes an element of continuity with these days of struggle, to become sand in the gears of capitalist killing machine every day, to prolong and expand the will of resistance against those who allow the hierarchical and capital system to exist, and who make profit out of it.

We support the prisoners who reject the logic of dissociation and distancing. We believe that strong point displayed in this struggle can be achieved also by the choice of continuity made by accused, after the arrest, in relation to the willingness to participate in the days against G20. In this case, in the absence of distinction between “good guys and bad guys”, the overcoming is achieved, compared to the Italian context. The cohesion between accused becomes the strong point not only to deal with the repression, but for the relaunch and continuity of the struggle itself as well.

A solidarity hug to Riccardo and to all prisoners of Hamburg!

Solidarity and strengths to rioters of G20!

Comrades and solidarians from Genoa