Chile : Update about the comrades Nataly, Enrique and Juan 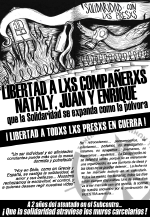 On Monday, December 11, the process of “replicas” of the Bombas 2 case begins, which consists of discussing the most “solid” arguments of the accusation against the comrades, where the accusations and respective defenses will be confronted.

It is estimated that this process lasts the week of December 11 to 15.

When the aftershocks are finished, there is a maximum period of 48 hours (working days) for the judges to call the final verdict: to declare guilt or innocence (in terms of power).

A call is made to be attentive to the date of the verdict, which is estimated to be between Monday, December 18 and Tuesday, December 19.