Brasil: “Who killed Indio?” — A response to the anarchist call for a Black December. 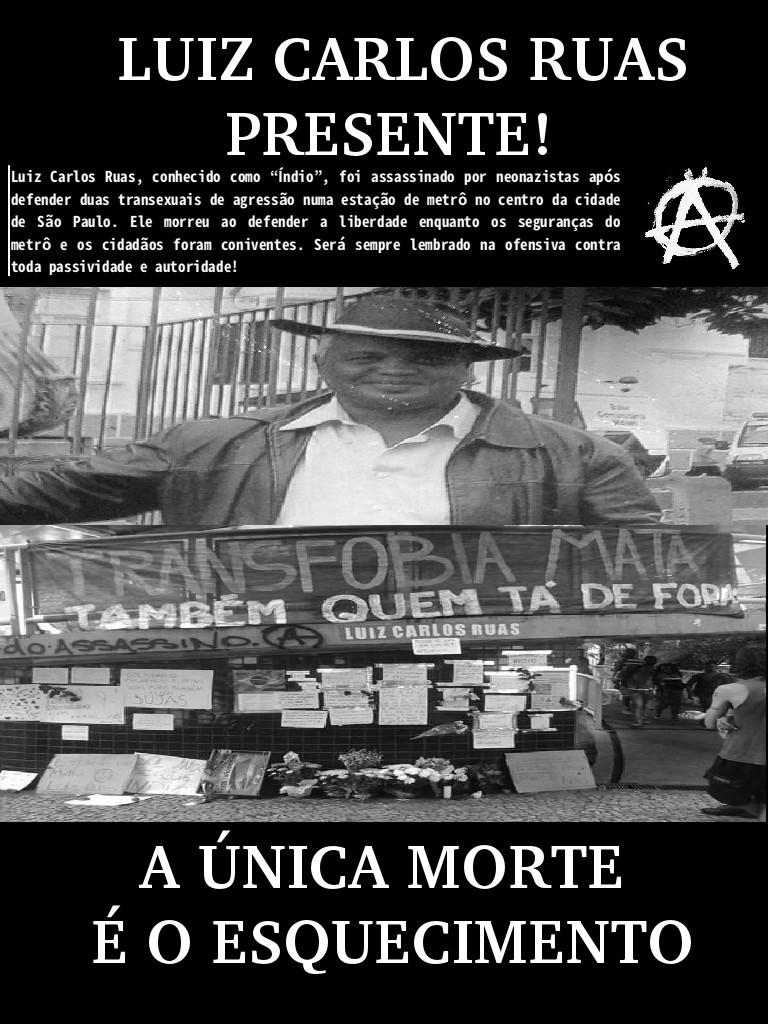 Luiz Carlos ruas presente, the only death is oblivion.

Luiz Carlos Ruas, aka Indio, was murdered by neonazis after defending two trans people from agression in a central subway station in São Paulo city. He died after defending freedom meanwhile security guards and citzens were conniving. He will alwways be remembered in the offensive against all passivity and authority!”

How’s that, “who killed him”? If the murderes’ names and faces are already known… It did not take so long untill the butchery media turned this event into spectacle. There was an exposure not only of who assaulted him untill his last breath but also of his family, of the trans people he defended, his life history and a lot of information applied just to create a huge smokescreen. Up this disgusting situation, two years after his death, it becomes indispensable to tell this event from beneath the claws of domination.

On a nothing peaceful Christmas night, two neonazis chased transsexuals inside the “Pedro II” subway station (name given from brazil’s colony last king) with the intention of doing exactly the same as they did with Indio. Which only demonstrates the persistent hunt against those who free their desires and wills and stands against the imposed normality. However, in a convinced denial of passivity, the 54-year-old street vendor has firmly decided to defend them. This attitude costed him his life.

The presence of the subway guards and the well-behaved citizens did not help and would not be different. Every day every subway station is full of automats blinded by the routine fulfilling superiors orders. Luiz Carlos Ruas, a black, autonomous worker, who kept his selling outside the station, against the usual doldrums of the cities, on his last day, as probably in his many previous ones, instinctively followed the search for freedom.

A truly insurgent act of solidarity and direct action, in the midst of an increasingly domesticated society that shuts its eyes to the war set up here and now. A contradictory war reinforced by the agents who as well as his aggressors caused the death of another black man without any questioning of this suspected authorship. Those are all structures programmed to kill and let die.

The security guards’ behavior was not surprising at all. Numerous cases are omitted day after day, sexual harassment against women, aggression against people working in train cars, beatings against people who are not welcome in this environment and means of transportation that, although only a few can afford, all suffer the damages of the existence of such civilizing technology that attacks life and nature. In the veins of the city runs the blood shed by the authorities and only by this way it maintains this murderer architecture.

So, as Alexis Grigoropoulos, murdered by police in the Athens ghetto in 2008, as Sebastian Oversluij, murdered by a bank guard after a robery attempt in 2013, along with so many other people who dared to seek freedom and therefore died without having their name remembered, Luiz Carlos Ruas aka Indio is one more that is more than alive in each act of inconformity and rebellion. Authorities and passivity killed Indio.

THE ONLY DEATH IS OBLIVION!
LUIZ CARLOS RUAS PRESENTE!
FOR A BLACK DECEMBER!