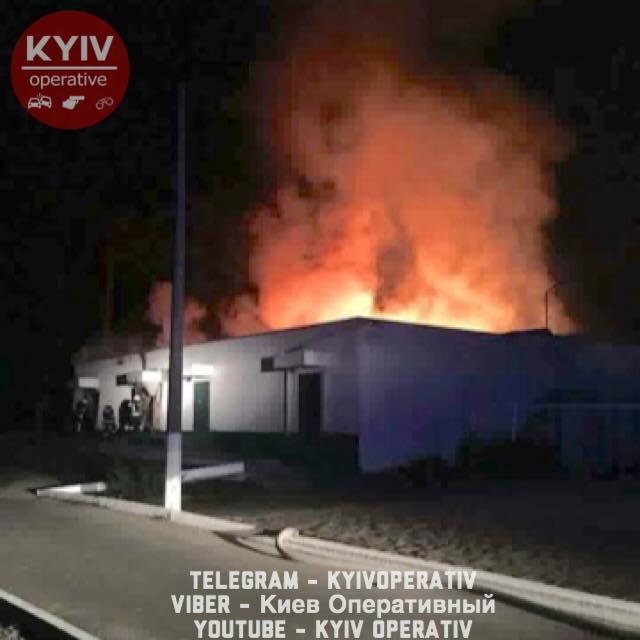 Anarchy Today Note: Ukrainian Media are unwilling to report the fire at the training center, yet the news and the photo are published in the Internet. We received the information by mail on September 20 2018. Тranslated by Anarchy Today.

Repressions and prisons have become part of our lives, as well as of lives of all those recalcitrant comrades who prefer to conduct an offensive struggle against the state and capital, attacking all manifestations of power and destroy the oppressive order. More and more often in the course of this struggle, we hear calls from all corners of the world for solidarity with repressed and imprisoned like-minded people, we hear stories how yet another one of us was put behind bars, beaten, tortured or even killed , and also hear how this or that infrastructure of anarchists was destroyed, plundered, how this or that initiative suffered from raids from punitive groups of the Ministry of Internal Affairs (MVD).

The authorities, like a hundred years ago, are trying to stop us. Today, like yesterday, we are opposed by the guardians of the state structures that were trained and endowed with the “legal right” or in simple words — state dogs loyal to their masters and interested in maintaining the status quo, repressing anarchists and other unruly people.

All these unpleasant moments will occur and accompany us along the way to our liberation. All this is expected and unsurprising. The call from the enemy has long been accepted by us, as soon as we became anarchists, and calls from our comrades became very clear. To us it only means that the struggle against manifestations of power has to be permanent! Therefore, only indefinite solidarity, struggle until the full victory and satisfaction of all our rebel desires! No negotiations with state officials: a constant conflict with the authorities!

Before telling our brothers and sisters about our next act, it’s worth talking and speculating on the chosen aim and the method we used. The method that our rebellious hearts preferred was coordinated with the convictions and ideas of other insurgent anarchists that attacks, arsons, explosions and armed actions against our enemies should be an integral part of the war against them.

Now about the choice of the target. As a target for retaliatory attacks, we consider enemy structures, factions and individuals, as well as any infrastructure connected and serving to commit state terror against anarchists and thinking people. The state continues to torture, break, destroy, arrange trials and throw freedom fighters in jail. Therefore, we attack those who control, arrest and kill us on a daily basis.

Our enemy: starting with the police, judges, prosecutors and prison guards, ending with conscious citizens who form and support this rotten society. In short, every key figure in the system, its every servant, is a target for us, anarchist guerrillas.

Unlike them, we are anarchists, and therefore we do not want to belong to any state and follow their laws. We are not obliged and do not want to obey the laws, because any law is supported by the inevitability of punishment for its violation on the right of vengeance appropriated by the state. In our relationships with other people we are not guided by laws written by officials. Our law is our ethics!

Each target segment requires separate consideration and explanation for their misconduct. Given that at night the fire was initiated in the training center of the Ministry of Internal Affairs, we should pay attention to this organized gang.

In Ukraine after the Maidan in 2014, the new government started the so-called reform of the Ministry of Internal Affairs. Its main task was to transform the police into the “national police”, to rehabilitate the image of the power structures and restore the people’s confidence in them. They are trying to convince the people that the new police is not that hateful police that appeared in the Soviet era. This trick is as old as the world itself. Inspite of all the reforms they remain the same cops! More than a hundred years ago the territory of modern Ukraine belonged to the Russian Empire, even then there was the police which was protecting the state and rich people, as it is doing today. Then all the revolutionaries waged war against it until the February revolution of 1917, after which the police department was abolished.

Now, the brainchild of the Ministry of Internal Affairs, which was created by the authorities and accountable to them, is completely structured and is aimed at carrying out repressive and punitive functions, protecting the powerful and wealthy citizens from our presence in the streets. Therefore, no old or new government and no state — Ukrainian, Russian, Belarus, Greek, etc., with their police and ministries — can never win our trust. We perfectly know all their intentions and therefore, as long as the repressive apparatus remains, we will continue our struggle!

An ordinary police patrol, operatives or a special-purpose group are in a state of readiness and, by the signal of the higher authorities, they will detain anyone, and then apply measures of restraint and punishment to him. All according to the instructions and laws that protect the state and capital. Before we get into jail and are handed over to the prison guards, our brother and sister will have to deal with representatives of the Ministry of Internal Affairs. So, the Interior Ministry and everything connected with it is viewed by us as an instrument to break the spirit and will of an insurgent anarchist, energetically moving forward.

From the point of view of the revolutionary perspective, one can also safely say that the existence of such a professional institution as the Interior Ministry harms not only us, anarchists, but also the rest of society, destabilizing and weakening its opportunities for self-defense — thereby leaving people without the right to self-defense, making them feel helpless. The population, being unable to solve problems independently, transfers these powers to the system, and the Ministry of Internal Affairs, in turn, like any other state institution, relies and thrives on fear, inability of people to realize their internal potential, without external constraints.

So, at night, on September 19, 2018, the center for training of the Ministry of Internal Affairs employees became the object of our attack. It is here, in the training center, that they are trained in order to successfully detain us, shoot at us, practice the seizures and assaults of our apartments in full arms, which ordinary people are not allowed to possess.

The training center is located 500 meters from Boryspilskaya Street, in the forest, in the Darnytskyi district of the city of Kiev. In the center there are pistol and automatic shooting galleries, an obstacle course, a tennis court, a volleyball court, a field for mini-football, training rooms, as well as a structure where groups of capture are practiced. It was in such a structure that we launched a red cock! For more than four months we had been looking after this object. Just during this time, in the above mentioned building, expensive repairs were carried out and electrical equipment was purchased. For arson, we needed 17 liters of incendiary mix, 10 car tires and old things found on the street. We made 2 fire areas in different places. Also on the wall we left a message: Destroy the Ministry of Internal Affairs. The guard and two dogs did not suspect anything …

Although our attack is symbolic, but still it points to the enemy and the direction in which resistance must develop.

This fire is for you. It does not matter to us whether you are guilty or not, whether or not you are involved in what you are accused of. The fact is that in the struggle against the state we are all guilty. Therefore, know that: if the “innocent” once deserved our solidarity, then the “guilty” will deserve it a thousand times …

We also want to say words of solidarity to the anarchists operating in the Chile, Greece, Italy and all the other comrades who fight both outside and inside the prisons! Know that your actions and struggle are important for us!